When cleaning cones which have a screw thread, it is important that the thread is not contacted by any corrosive solution. If the thread gets corroded, the cone may not seal correctly or it may bond to the base and be difficult to remove. And with Pt cones, the thread is likely to wear out before the Pt insert. It is also important to keep the thread in good condition to prevent the possibility of cross-threading and potential damage to the instrument housing.

Comments from the PLASMACHEM listserver include:

"We noticed that the threads of the Copper based, Pt skimmer cones would wear out long before the Pt insert."

"We tend to clean the cones in dilute acid and judge they are clean when they have a salmon pink "new penny" appearance. It is in this condition that the copper cone is likely to cold weld to the copper threaded insert in the interface assembly, and to the flat thermal transfer area outside the thread."

The Glass Expansion ConeGuard Thread Protector seals the thread and protects it from corrosion during the cleaning process. The following ConeGuards are available: 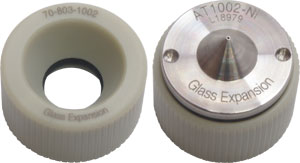 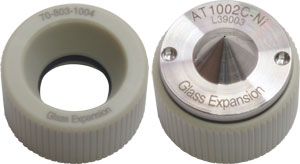 The ConeGuard simply screws onto the threaded part of the cone and o-ring seals prevent any solution from coming in contact with the thread.

ConeGuard with sampler cone for Agilent ® 7500